There it was! Almost exactly as he had described it! Back all of those years ago as we sat at the blue laminex table eating the 5000th chop, potato, peas and carrots meal of that winter, Dad’s words had shaken the foundations of an ever-distracted adolescent mind just a trifle. It was only a slight tremor back then but the fissure stayed.

His exact words echoed through the years: “ They looked like spacemen’s houses.” Before me in the greening wheat fields outside of Merredin were those Martian abodes. To be factual, there were 46 concrete igloos in the vicinity of this farm.

Well, I’ll be blowed. Who would have thought that in 2016, these relics of the past would tell an intriguing and powerful story that captured the harrowing and dark times that Australia faced in 1942-3.

Our safe and secure land of sweeping plains, of long smokos and billy tea in enamel cups was pulverised when Japan launched its attack on Darwin on 19 February, 1942. An earthquake of bombs that floated from the 188 aircraft strafing Darwin killed 243 and wounded 300-400, destroyed 20 aircraft, sunk 8 ships in the harbour and damaged civil and military facilities beyond repair.

What a pleasant and idyllic introduction to the Japanese war machine!

Not that the bombing on that fateful Thursday morning was a complete surprise; in fact, John Curtin, our Prime Minister, had declared that, “The enemy thunders at our very gates” on Monday, 26 January, 1942. He later added in a rousing speech on the Kalgoorlie train station platform, ”There has never been a time when the challenge to our occupancy was so direct and menacing.”

As to our readiness in meeting the rising sun juggernaut, Curtin warned Churchill, the British PM, “It is clearly beyond our capacity to meet an attack of the weight that the Japanese could launch.” In late January, 1942, Australia had not one aircraft that could compete with Japanese Zeros, the vast bulk of our experienced fighting infantrymen were overseas and many training at home did not have rifles. The Arnie Schwarzenegger of oriental persuasion was not only going to kick sand in the face of the scrawny Aussie, he was probably going to bury him and play soccer with his dismembered head.

Back to the greening pastures in Merredin. 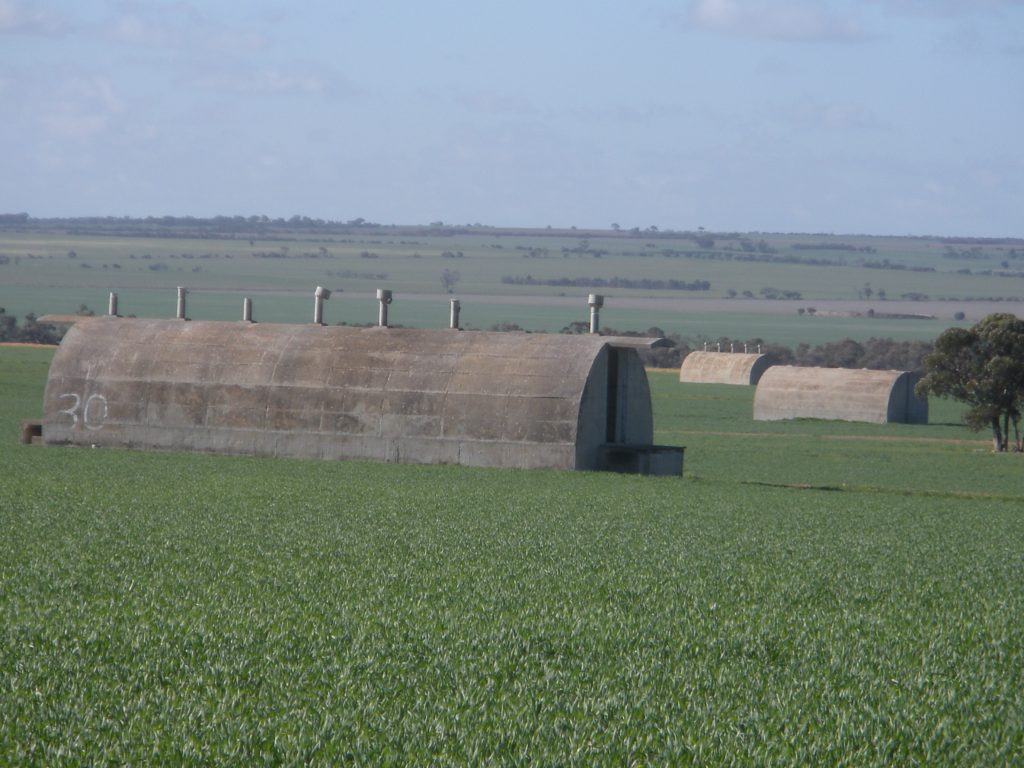 Dad was right. By stretching our visual imagination (because none of us have ever seen a Martian 4×2 suburban equivalent), they could pass muster.

To prepare for the Japanese onslaught, the Australian military set up Fortress Western Australia around Nungarin and Merredin.  Nungarin is a sleepy farming hamlet some 294 kms east of Perth and 40 kms north of Merredin. In September, 1942 this Rip Van Winkle of a town was jolted out of somnolence when 1720 acres (696 hectares) of land were acquired, 12 large warehouses with a floor space capacity of 170,000 square metres were built and 1200 servicemen moved to the area. Its official title was No 7 Australian Ordnance Depot. It was developed as part of a supply line for fuel and munitions which stretched from Wyalkatchem to Ardath. It became the largest storage facility for ordnance in WA at that time. 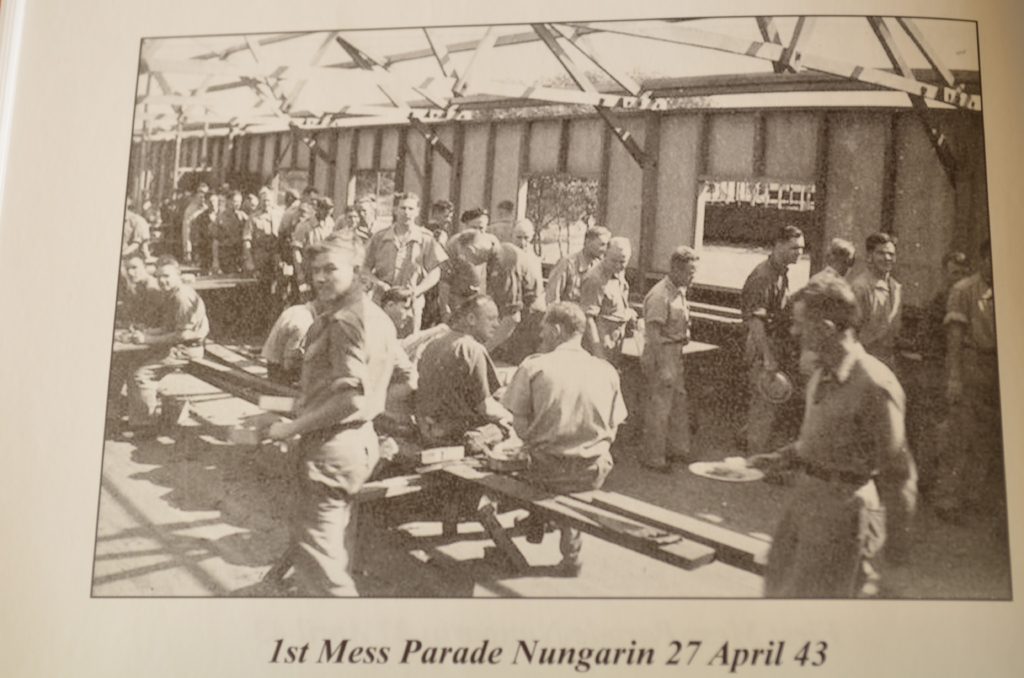 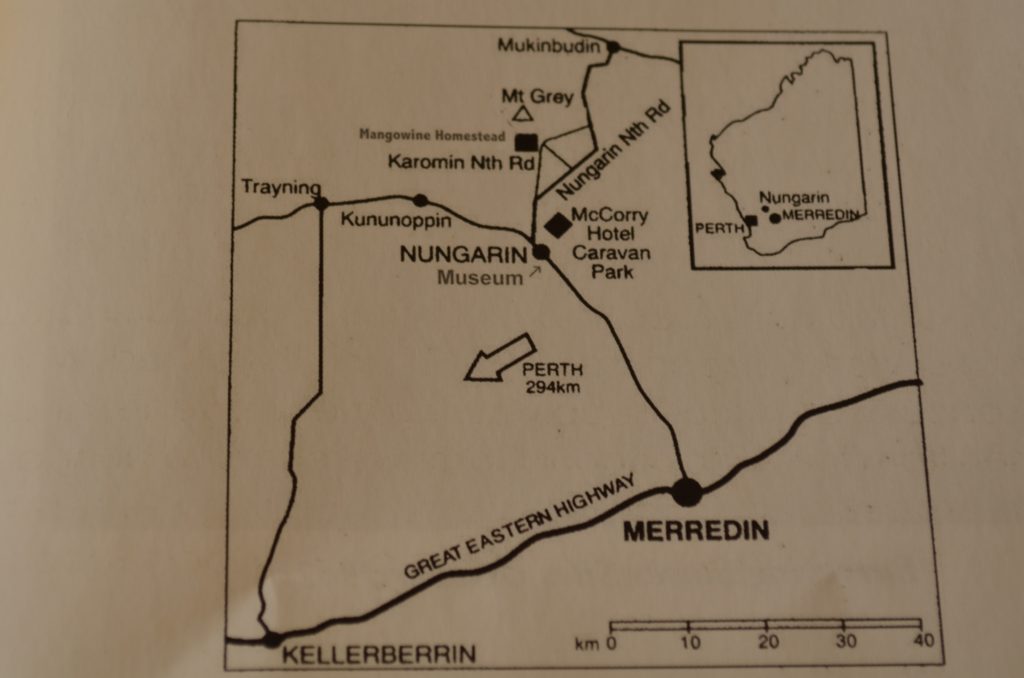 Nungarin was chosen because it met a number of criteria deemed important by military planners. Mindful of the havoc wreaked on Darwin earlier in 1942, Nungarin was a bridge too far for Japanese warplanes launched from aircraft carriers off the WA coast. They would have sufficient fuel to reach the target but on their way back, the Zeros would be landing/crashing in the main street of Northam competing with the likes of Dodges, Malvern Star bicycles, and mothers with prams doing their shopping.

Secondly, Nungarin was on a rail network which connected Carnarvon (north) and Albany (south). Cunderdin, a regional airport, would provide some support if required even though many of the aircraft were reminiscent of the Sopwith Camel biplanes of WW 1 vintage.

Merredin was set up to complement the military preparedness of Nungarin. Two igloo shaped hangars were built in 1943 to house radar and radio spares, ammunition for .303 rifles and .50 calibre Browning machine guns and other pieces of equipment vital to the war effort. Sheets of tin were placed on the ground to help camouflage the site as a salt lake. It sounds a little implausible in 2016 but remember the pilots would have been unaccustomed to the terrain, especially if they had supped on sake to steady their nerves. Its official title was No 10 RAAF Stores Depot. 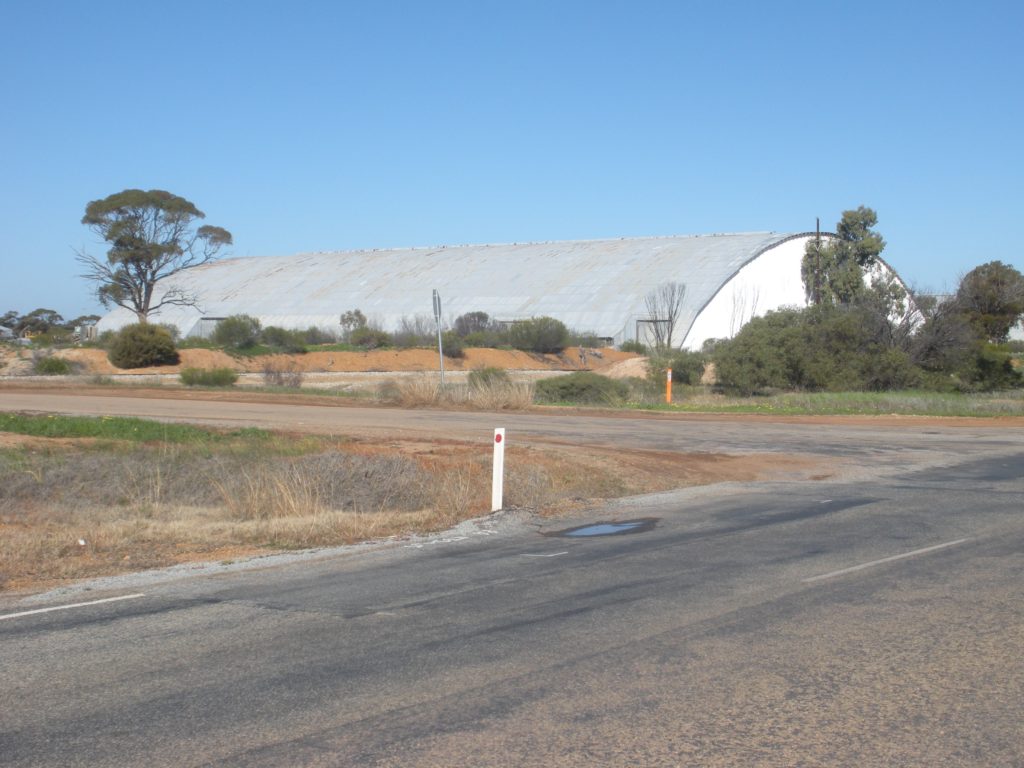 The hangars are now used by Philborne Engineering for the manufacturing of farm equipment and Co-Operative Bulk Handling which services farms in the region.

A hospital was set up to address the needs of casualties in the event of an invasion. The 2nd/1st Australian General Hospital had an impressive pedigree. Its first locale was the Gaza Ridge in Palestine in 1942. Then it was shifted to Guildford and finally Merredin in July, 1942. By November, it had 5 medical officers, 9 other officers, 34 nurses, 134 other ranks and 264 beds. It had over 600 patients at one stage. As the threatening tide of invasion via WA receded, the hospital was relocated to Papua New Guinea to serve the needs of servicemen brutalised on the Kokoda Track. The focus of the war had changed.

Two fuel tanks with a six million litre capacity in total were sunk in Merredin. One would provide standard fuel and the other smaller one would cater for aviation requirements for the airport at Cunderdin. The tanks can be viewed from the car park of the BP garage on Great Eastern Highway provided you have a giraffe-like neck.

Post-war Merredin was the setting for numerous auctions involving the military hardware. General Grant tanks were sold to farmers to plough the uncultivated bush and anti-tank guns were used as trailers. Tanks were sold for 25-50 pounds.

Back to our alien structures on the farming lands outside Merredin. I can see you’ve been waiting with baited breath.  Officially, they were part of the No 6 Central Reserve Munitions Depot.  They stored everything from 250 kg aerial bombs to small arms ammunition. The igloos were guarded by personnel who lived in 40 timber-framed buildings set among the trees. They have long disappeared, swallowed up by the encroaching demands to extend crops under cultivation.

The Federal Government bought the land from the owners for the war effort and they had to repurchase it after 1945. The current owners found it too difficult to remove the concrete structures so they remain as reminders of rich military tradition that can be traced back to the Nek assault at Gallipoli and the Somme.

So, next time you drive through Merredin on the way to Kalgoorlie or, for the more adventurous, the meccas of Melbourne or Sydney, remember that Alf said there are some spacemen’s houses in the vicinity.

One thought on “Alf’s Stories”